Ballet which found the roots of its origins in the fifteenth century has evolved over the ages to branch into different styles. The classification of ballet styles includes classical, neo-classical, and contemporary ballet. 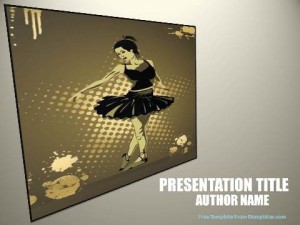 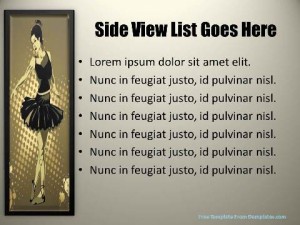 Classical ballet is the original and traditional style, neo-classical ballet was discovered during the 20th century where the speed of the execution was increased and it became non-narrative in nature, and contemporary ballet is influenced by modern times and has fusion dance moves, and does not necessarily include performing in typical ballet attire. The free ballet PowerPoint template has a sepia-toned tilted frame with the image clip of a ballerina in a tutu, set against a darker beige background. The ballet background ppt can be used by ballet schools and training institutes during the provision of their theoretical curriculum and syllabi on ballet’s intricate techniques, with inclusion of practical aspects such as embedding image/video clips of the three styles. Dance websites can use the template for their archives in explaining ballet.

You can download Ballet Styles powerpoint templates using  given below link: