Christianity as a religion has been divided into various sub-sects under it, known as Christian denominations. 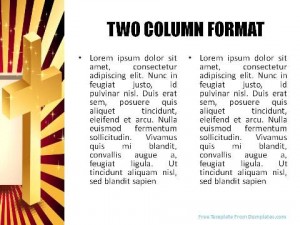 These denominations are individual religious bodies under churches, with a common name, structure, and doctrine. The denominations are distinguished between each of the groups via the doctrine and by the church authority. The five major Church bodies of Christian denominations are Anglican, Catholic, Protestant, Eastern Orthodox and Oriental Orthodox. This free Christian Denominations PowerPoint Template can be used to present the varying views of the different denominations on issues such as the nature of Jesus, the authority of apostolic succession, etc. It can also be downloaded to make presentations during celebrations of festivals such as Christmas and to present the differing customs and practices of each group. It can be used during religious gatherings for each Church body on occasions such as baptism and in church websites to disseminate information on each sect’s theological teachings, and during familial gatherings to present their ancestral history in following the religion.

You can do free Christian PowerPoint template download from below location: