The Template represents here the Pitcher, a player amongst the nine of a team of baseball players, in action. He is about to pitch or throw the ball at the batter. 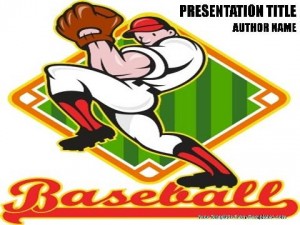 The pitcher is the key ingredient to any baseball team and probably plays a very important role in the victory of his team. Very simply explained, the pitcher is the player who pitches or throws the ball to his team mate, the catcher, without letting the batter being able to hit or make contact with the ball. The pitcher’s attempt at each throw is to aim to retire the batter without scoring, which is his prime objective. The pitcher must start every play with the catcher from a designated area – in his case, from the pitcher’s mound, with one foot in contact with the pitcher’s rubber. His duty however continues beyond his throw, as he is expected to field well also. There is Golden Glove award meant for the pitcher with the best fielding ability in the US. Some of history’s great pitchers have been Tom Seaver, Walter Johnson, and Sandy Koufax who have brought great fame to the art of pitching. The free Baseball PowerPoint template shows a fully geared pitcher in action with a white background and a green field as a backdrop who is about to start the game with a bust of energy. This template can be used by coaches for training purpose for starters. This can also be used in league matches to put up scores now and as a template in schools for understanding the techniques of baseball pitchers and also used in online shopping for the sale of gears of a pitcher.