The template is about baseball in USA. The earliest mention of the game in US was ironical. 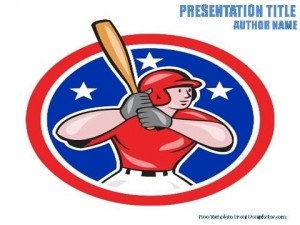 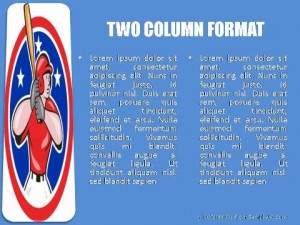 The template is about baseball in USA. The earliest mention of the game in US was ironical. It is based on an ordnance dating to 1791, in Pittsfield, Mas, banning the game from being played within 80 yards of the town house meeting hall. Baseball came to the US from England, brought in by the immigrants. The old stick and ball game went through many modifications of rules, until by 1845 rules which form the backbone of the current day games were formed. These included rules specifying the nine man teams, nine innings matches and bases 90 feet apart. The first team in the US to play baseball under modern rules was the New York Knickerbockers. The template reveals a batter ready with his bat within blue and white circles laced with stars. The representation of baseball in the foreground against a backdrop of the blue and white flag of the US spells out the history of the game in the Americas. The free Baseball Power Point template is set against a white background with a blue circle with white and red borders with a picture of a baseball player with three stars in the centre depicting the importance of baseball in the life of the people of the country. This template can be used for displaying the announcement of a league or of a match. It can also be used as a template in schools for various games played in different countries. The template is also used online for sale of baseball costume, and gears used in this game. It can also used in online website about hosting of a match and other information relating to it.