If you are in the salon business, you must have also an idea about the significance of baby’s first haircut. Isn’t it great to award the parents of the baby a first haircut certificate? They will be surely delighted by your gesture. Make sure to left an empty place on the certificate where the parents can paste a photograph of their baby after receiving the first hair cut as it is a brave act performed by the little one. After all, sitting at one place for so long that too before a mirror is no less than a feat for a baby. It always remains an important event for the parents and some parents ensure that their baby receives his or her first haircut within few months of birth.

So, if you are eager to present such certificates, you can effortlessly make use of our readymade baby’s first haircut certificate templates. There is a beautiful collection of such templates below that you can download and can print the same to keep the entire affair hassle free. 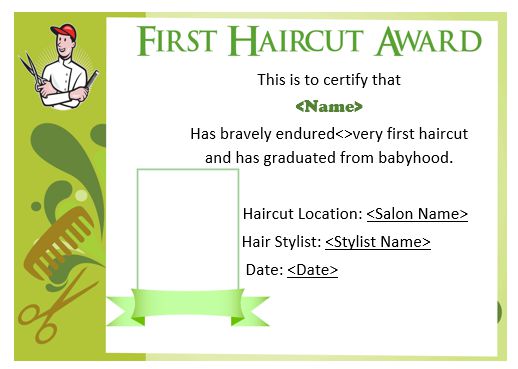 The certificate template designed in green and white looks nice and has a header in green on a white background. While there are images of a barber, a comb and a scissor on the left pane, the right pane is devoted to text.

The template features a lovely border in bright pink and blue around a white background in which the header is in deep purple along with an image of a comb and a scissor in green. The beautiful font style and the cute orange illustration looks great on this template. 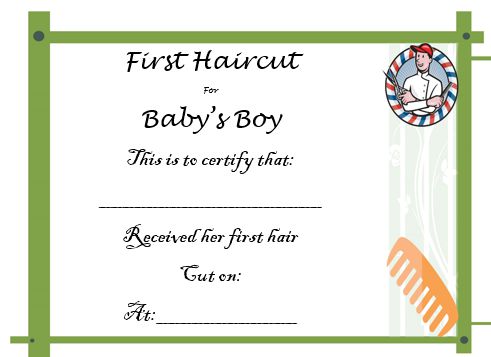 The template has a wide green border at two opposite sides and narrow ones to its remaining sides. There is also an illustration of a barber to its top-right and a comb to its bottom-right corner on a white background. 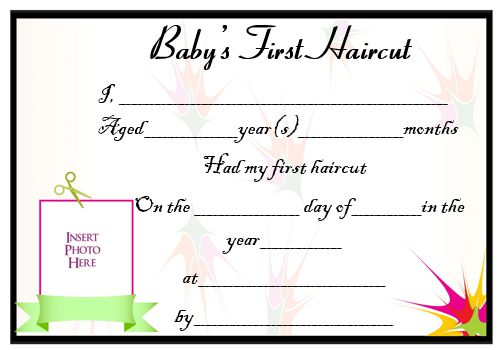 The template comes with a black border around a white pristine background. There are also splashes of multiple colors like bright pink, yellow and green to one of its corner and a dedicated space to paste your tiny tot’s picture. You can download it, fill it and use it right away. 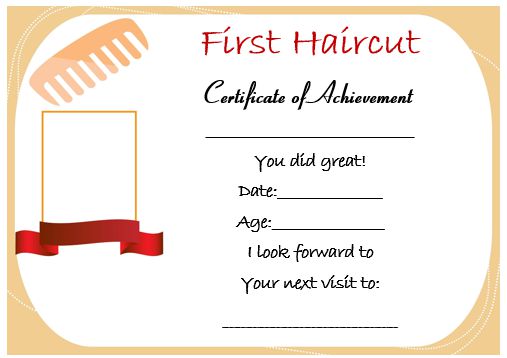 The template has a text box with rounded corners. The bright red header and the red ribbon to its left give it a nice look. Overall, the template looks sophisticated for the occasion. 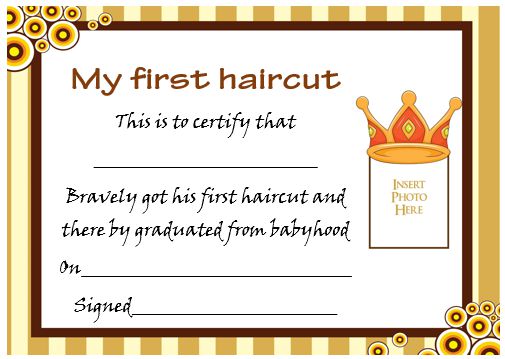 The template comes with a soothing color combination and an attractive border. It also has a dark brown border and an image box with an image of a crown at its top on its right side on a white background. 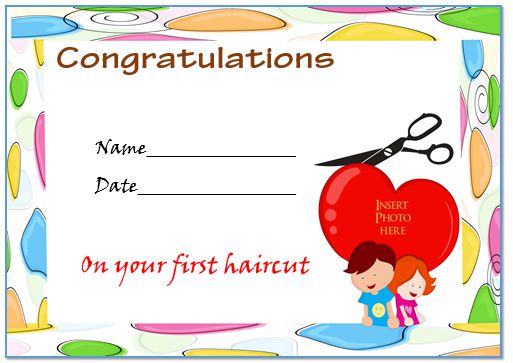 The colorful template features a heart shape box to include the photo and cute illustrations of a small boy and a girl just below the same. The border is wide with many oval and circular shapes. 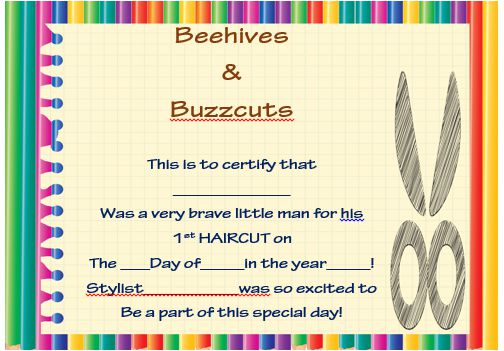 The colorful border in bright colors and an image of a large pair of scissors defines the template.The brown header and the navy blue text offers the right kind of contrast desired for an eye-catching certificate template. 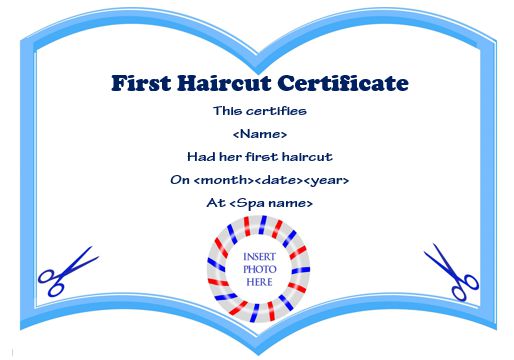 The template resembles an open book in its shape and has a sky blue border around a white background. The place to insert image of the child is at the center, inside a circular shape. 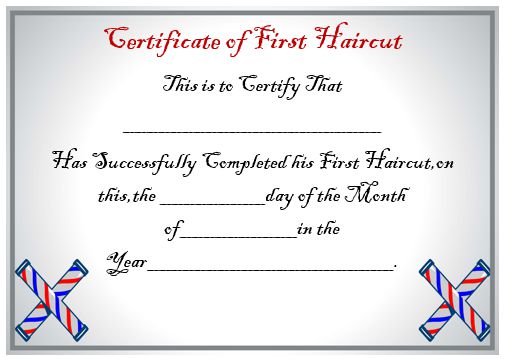 The certificate is a sophisticated one with a bright red header and text in conventional black on a light colored background with some nice illustrations at two of its corners at the bottom. 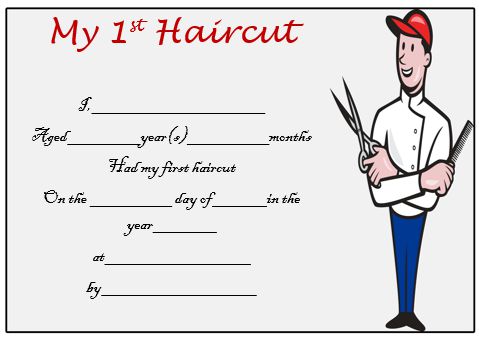 The certificate has a prominent image of a barber holding a pair of scissors and a comb on a light gray background.The red header, the beautiful font type of the remaining text and the narrow black border are its added attractions. 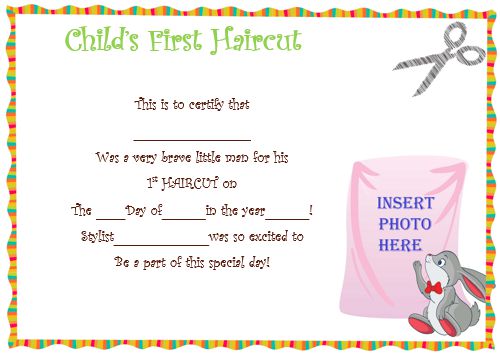 The template has a beautiful and colorful border on a white background. However, it is the image of a cute rabbit at one of its corners and the attractive font style of the text that steals the heart. 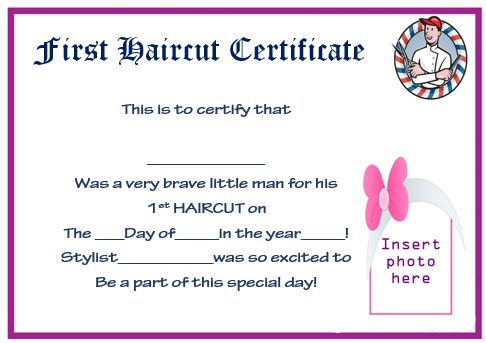 The certificate comes with a purple border and a white background that consists of text and header in navy blue, an illustration to its top-right and an image holder to its bottom-right with a hint of soft pink. 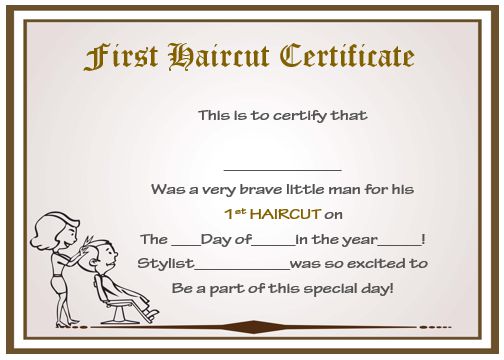 The certificate features a double border with white space in between. The cute illustration of a woman cutting the hair of a child and the brown header are the added attractions of this certificate. 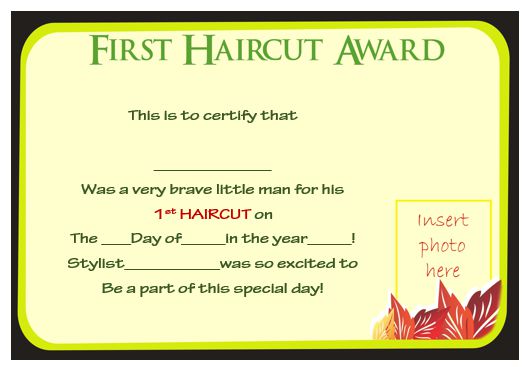 The certificate has a lovely border in green and black that creates a wonderful contrast. The images of dry leaves at one corner, green header and a bit of reddish brown on a light background make it quite attractive. 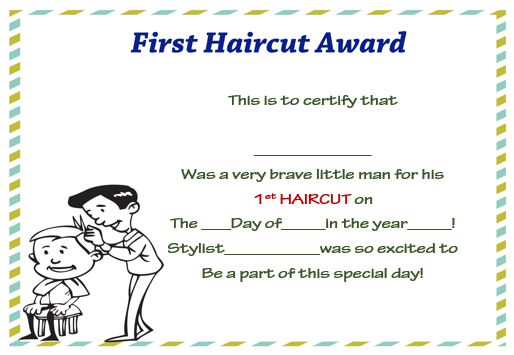 The certificate is simple and sweet with a nice illustration of a barber giving a haircut to a child in its bottom-left corner and a colorful border. The blue header and the green and red text on a white background add more beauty. 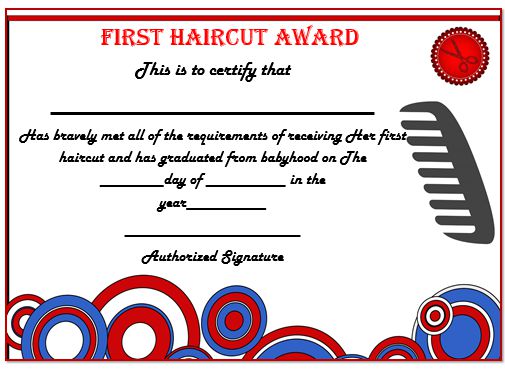 The certificate has a multitude of circles in aaa combination of bright red and blue at its bottom on a white background. It also features a prominent border, an image of a comb and a pair of scissors that makes it watchable. 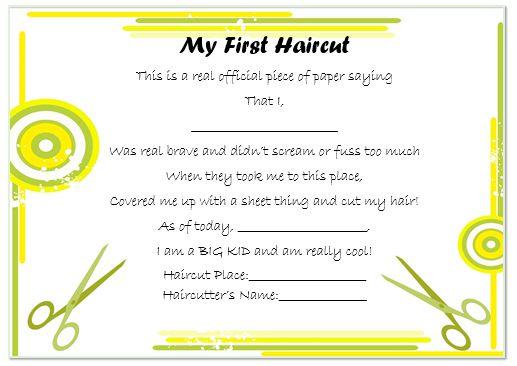 The combination of green, yellow and white never fails to mesmerize and the certificate with the same is an absolute winner in this regard. The certificate also features beautiful text and images of a pair of scissors to its both sides. 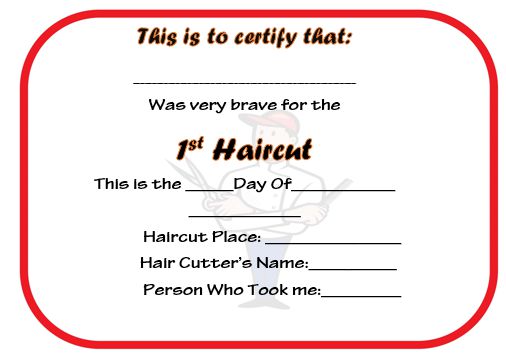 The certificate features a prominent red border on a white background, minimal text in contrasting color, and an image of a barber as a watermark.

There are multiple images of a pair of scissors as a watermark on gray background on which an orange colored border with rounded corners and text in contrasting color gives it a distinct look.

Cultural significance of the first haircut

The first haircut holds much importance in almost every culture on our earth. In Mongolia, the first haircut is given to boys in their even years and girls get the same in their odd years like at 3 years, 5 years, so on as per the lunar calendar. In the Jewish community, it is given at the age of three and a ceremony is held for the same which is called “upsherenish” which is called “halaqah” in Hebrew i.e. smoothing. After the first hair cut, the boy or girl has to enter into the formal education system. In Israel, baby gets their first hair cut mainly on a Jewish holiday observed as “Lag Ba’omer”.

In Central Asia, there is a country named Turkmenistan where the first haircut is done when the child turns one. It is performed by the maternal uncle or male relative of the child’s mother as it is a belief that such an act will provide protection to the child. In India, the Hindu community has an innate belief that the first haircut of the baby relieve him or her from the bad habits of the past birth. The ceremony held by the Hindus on the day of first hair cut is called ” Mundan” or “Chaula”.

Similarly, in China, first hair cut is given at the age of one month and not all the hairs are chopped. A few are left at the crown and they don’t discard the hair that has been cut. Instead, they preserve that hair. In Malaysia, the first haircut ceremony is called “Cukur jambul”. It is performed either after 40 or 44 days of a child’s birth at the grandparent’s house.

So, now that you know that how much first hair cut enjoys cultural significance, use our beautiful collection of first haircut certificate templates to suit your needs.